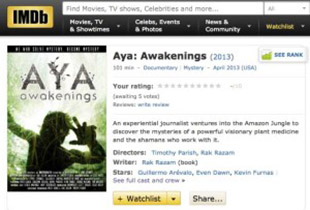 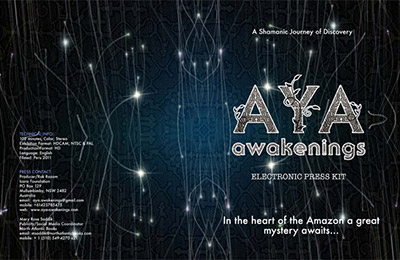 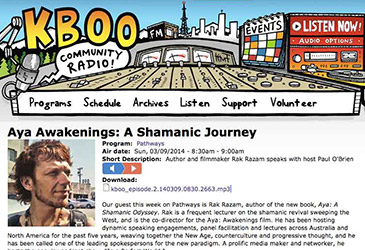 Our guest this week on Pathways is Rak Razam, author of the new book, Aya: A Shamanic Odyssey. Rak is a frequent lecturer on the shamanic revival sweeping the West, and is the co-director for the Aya: Awakenings film. He has been hosting dynamic speaking engagements, panel facilitation and lectures across Australia and North America for the past five years, weaving together the New Age, counterculture and progressive thought, and he has been called one of the leading spokespersons for the new paradigm. 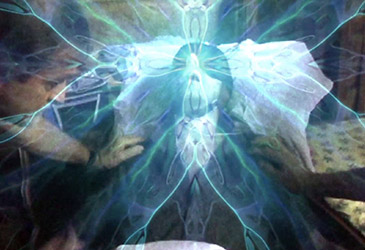 The new film Aya: Awakenings goes inside the world of ayahuasca, exploring the shamanic resurgence and ayahuasca movement in Peru and around the world. With trippy visuals, jungle sounds and more, the movie attempts to capture the experience of taking the hallucinogenic substance. The movie also explores the ayahuasca tourism industry in the rainforests of South America[…] 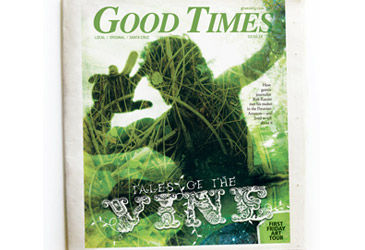 Razam’s uncanny experiences in the Amazon are chronicled in his stunning documentary movie Aya: Awakenings, a companion piece to the book of the same name. Hailed by many viewers as the definitive film on the subject of ayahuasca, Aya employs an impressive array of visual and audio effects to convey the essence of the trans-dimensional experience. The footage of Razam’s unmistakably authentic epiphany at La Rosacita is presented in all its mind-scorching intensity[…] 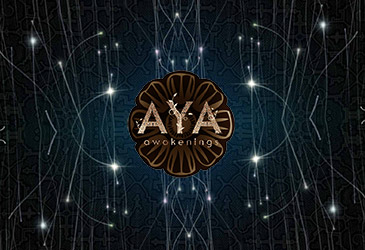 With his book Aya: A Shamanic Odyssey, and his new documentary Aya Awakenings, Rak Razam has successfully redefined what it means to be a “gonzo” journalist. Whereas the early psychedelic authors (Leary, Thompson, etc.), managed to get caught up in the thralldom of celebrity status, often publically displaying extraordinary egos that were in stark contrast to the supposedly unitive ego dissolving experiences of the psyched out 60’s, Australian citizen Razam[…] 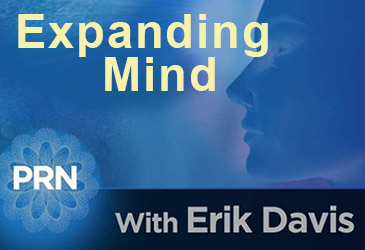 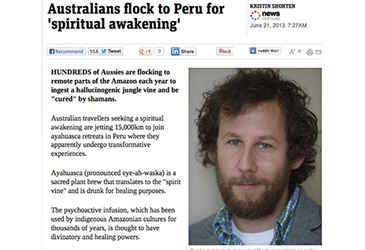 Australian mainstream media story about ayahuasca, and the film Aya: Awakenings, that largely gets the message, despite media bias. May be the first time the word “astral” is communicated in an interview to middle-Australia. 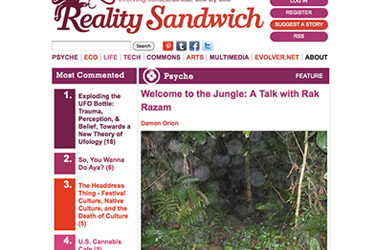 While it’s doubtful that any movie will ever be quite as impactful as a deep psychedelic journey, Rak Razam’s new documentary Aya: Awakenings comes incredibly close. Adapted from Rak’s 2009 book “Aya: A Shamanic Journey,” it chronicles the Australian journalist’s uncanny experiences with ayahuasca and DMT in South America. Accentuating Razam’s narration with lush, vivid visuals and all-enveloping audio, the film is a multisensory, multidimensional mindblower, leaving the viewer stunned, invigorated and filled with reverent awe for the Great Mystery. 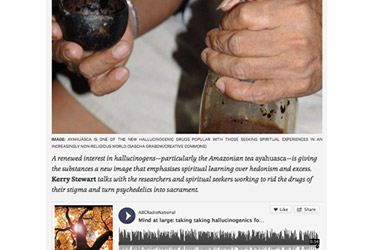 Shamanic filmmaker Dean Jefferys (who wrote and directed the seminal documentary Shamans of the Amazon in 2000, documenting his journey deep into the heart of the Ecuadorian rainforest to meet two Amazon Shamans, to learn about and experience the ancient ayahuasca ritual) interviews shamanic filmmaker Rak Razam, about his new documentary film Aya: Awakenings. They discuss both their films and the process of being filmmakers, the evolution of the Western ayahuasca scene in the Amazon in the 12 years between both films being made, and the nature of the global shamanic resurgence itself. A fascinating interview for all those interested in visionary cinema.

Join the Awakening to access your Free Jungle Fever video and other exclusive bonus material!